Home Uncategorized “Please don’t let me be a widow when I am still young” – Adult star “Nong Nat” waits at sick Harold’s side
Uncategorized
September 12, 2016 stefan 0 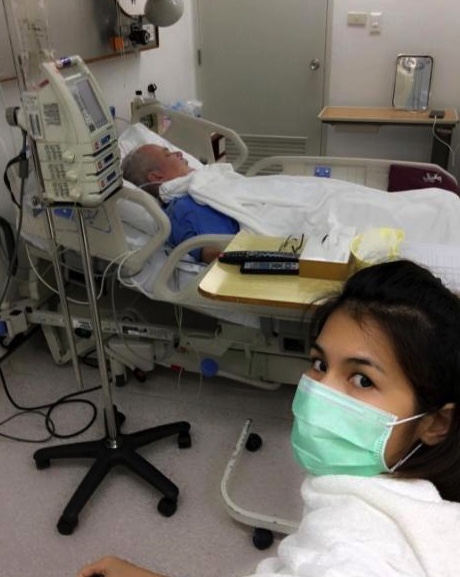 BANGKOK: — Former Thai sex star “Nong Nat” who married Harold the aging American businessman, is reportedly at his bedside in a hospital ICU.

She has posted a heart wrenching picture as Harold tries to recover in intensive care – but she is right by his bedside should he need her, reported Sanook.

Though the latest installment in the drama of their lives seems a tad more OTT than ICU after she admitted that he had just caught a cold from a bedtime kiss.

She said that both of them had been ill in recent months: “We are not your average couple, ” she said. “We have persevered for the last two months and are always at each other’s side.

“He was stubborn. He thought he would never get sick. He caught a cold giving me a goodnight kiss”.

Nat said that she was always at his bedside in the daytime – regrettably she is unable to attend to his needs at night as there is no other bed in the room, just a chair.

She mentioned that Harold had been coughing: “The air con was so cool and we couldn’t turn it down,” she said. “So I wound a cloth around his throat”.

This was apparently to warm him and thankfully it did the trick and Harold slipped off into the land of nod.

Rather dramatically, perhaps, she added with a hashtag: “I don’t want to be left a widow as I am still a young woman”.

Harold and Nat’s marriage was announced earlier in the year and their story has been the fodder of much online comment. Harold is not short of a bob or two having business interests in his homeland and China.

No word was available from doctors about his condition and it was not immediately apparent exactly where the hospital is.

But we are hopeful that Nat will keep us updated on social media.